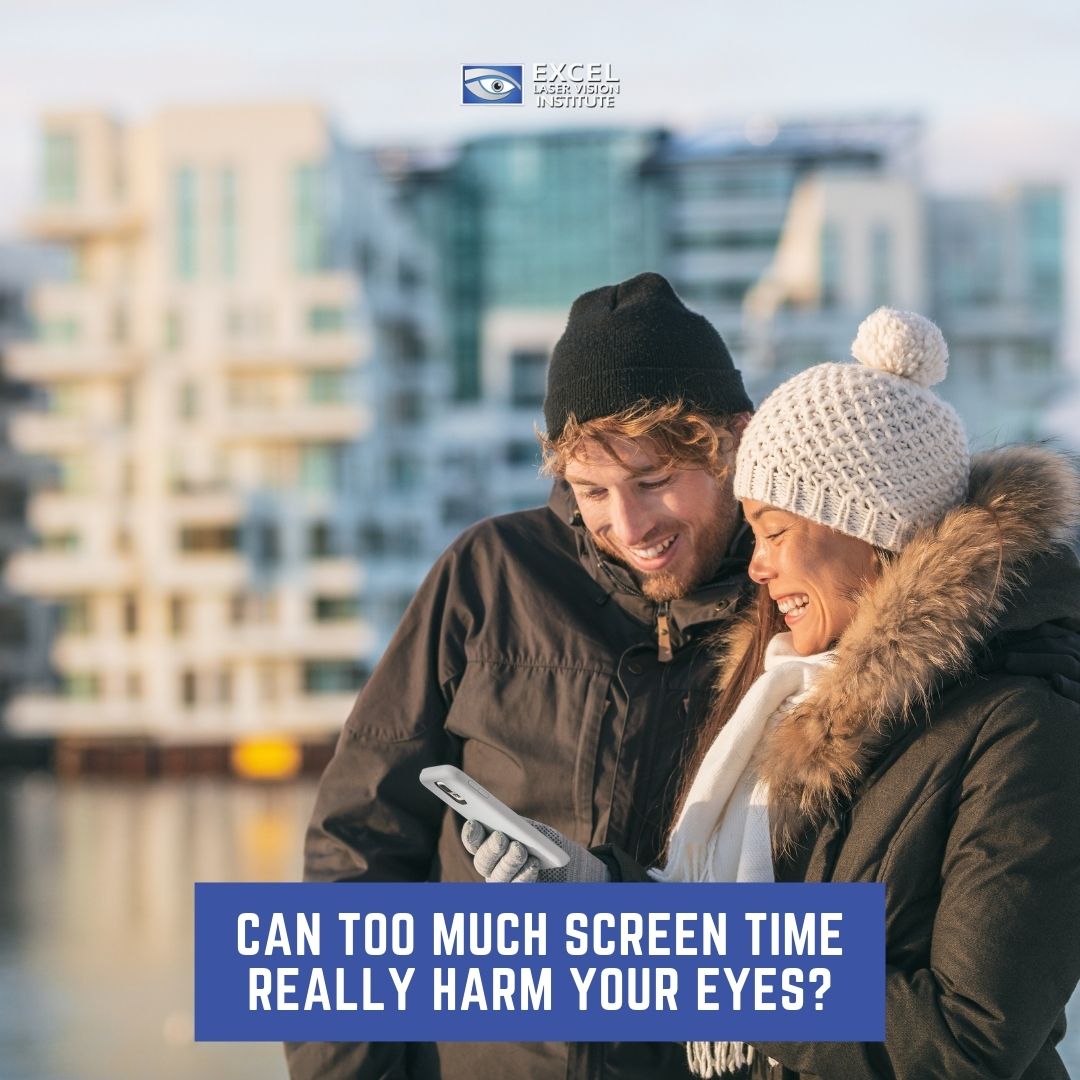 Can Too Much Screen Time Really Harm Your Eyes?

We’ve all heard about how spending too much time on your computer or your cell phone can come with consequences for your eyes. Your parents may have set limits on how long you were allowed to watch TV when you were a child, but in a modern world highly motivated by technology, it can be difficult to catch a break when you need these devices for work or to stay in contact with members of your household. Hope is not all lost, though. Our LASIK Orange County specialists can teach you how to effectively manage your screen time and take better care of your eyes by becoming aware of the risks and how to monitor how much time you are really spending on all of your devices. 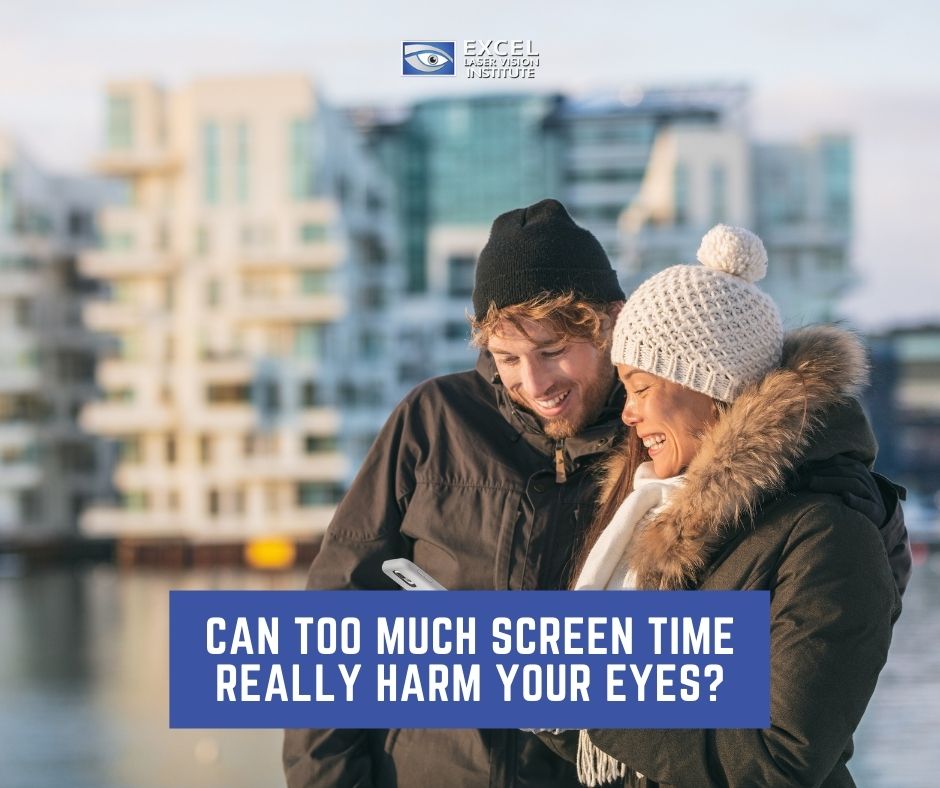 How much time are you really spending on your phone?

Based on several studies conducted, it appears that the average American spends between 3 hours and 15 minutes to 3 hours and 43 minutes a day on their cellular devices. People are also checking their phones an average of 58 times a day, 30 of those times being during work hours. As mobile device use increases, the amount of time spent watching television decreases. During the 2020 lockdowns, screen time only increased.

What is digital eye strain?

DIS, also known as computer vision syndrome, is a common vision problem that persists in individuals who are using their devices for 2 uninterrupted hours. It is disturbingly common, as it has been surveyed 58% of American adults suffer from DIS/CVS. While permanent vision damage from screen time is rare and it’s probably not going to lead you requiring Orange County laser eye surgery, it can lead to damage in your retina. If you do not take adequate breaks away from the screen, you may experience pain in your eye or headaches. If you are not drinking an adequate amount of water everyday, then you are more likely to experience frequent headaches. If you have pre-existing eye conditions, this can also escalate the problem.

Too much screen time can also be linked to other physical and psychological health problems, including obesity, insomnia, depression & anxiety, neck and back problems, and poorer grades.

Addiction just as bad as dependence on physical substances?

It’s easy to understand how easy it is to get immersed in the world of screens. Unlike the traditional television, you get to control what content you see and when you want to see it, and for how long. You can do just about anything on the Internet, almost giving you a sense of augmented reality, but can being addicted to a screen be just as bad as other forms of addiction such as gambling, alcohol or drugs?

Almost anything that triggers our reward system can become addicting because everyone wants to feel good all the time. Experts disagree on whether or not screen addiction should be approached the same as other forms of addiction. Mark Griffiths, a Nottingham Trent University behavior addiction professor has stated his own opinion on the topic, “I certainly believe that things like video games, social media, gambling, et cetera, can be genuinely addictive. [But] by my definition, very few people are genuinely addicted to video games or are genuinely addicted to social media.” In other words, he believes that screen activity addiction is serious, but the amount of people who actively suffer from this issue is exaggerated.

It also turns out that it’s not the screen itself that causes the addiction, but it is dependent on the type of content one is consuming. The faster the pace, the more addictive.

It is recommended that every 20 minutes you spend on a screen, that you do something else for 20 seconds, 20 feet away from your device. This can help reduce eye strain caused by looking at a screen for too long. You can also try to do some of your favorite activities offline. If you are an avid reader, for example, read the old fashion-way again and shop for physical copies of your favorite books.

If you feel that your eye strain may be caused by an underlying condition not caused by your screen time, talk to your eye specialist right away. They ask you questions regarding your optical and general medical history and run any necessary exams, but if you are someone who has difficulty even looking at screens due to preexisting vision problems, then you may be a candidate for Orange County  LASIK eye surgery. If you are seriously considering this option for you and aren’t sure where to begin the process, give us a call today at (866) 923-9235. 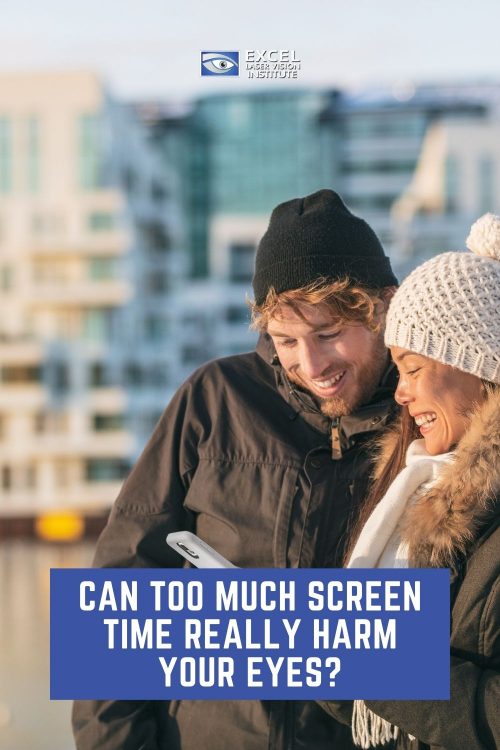 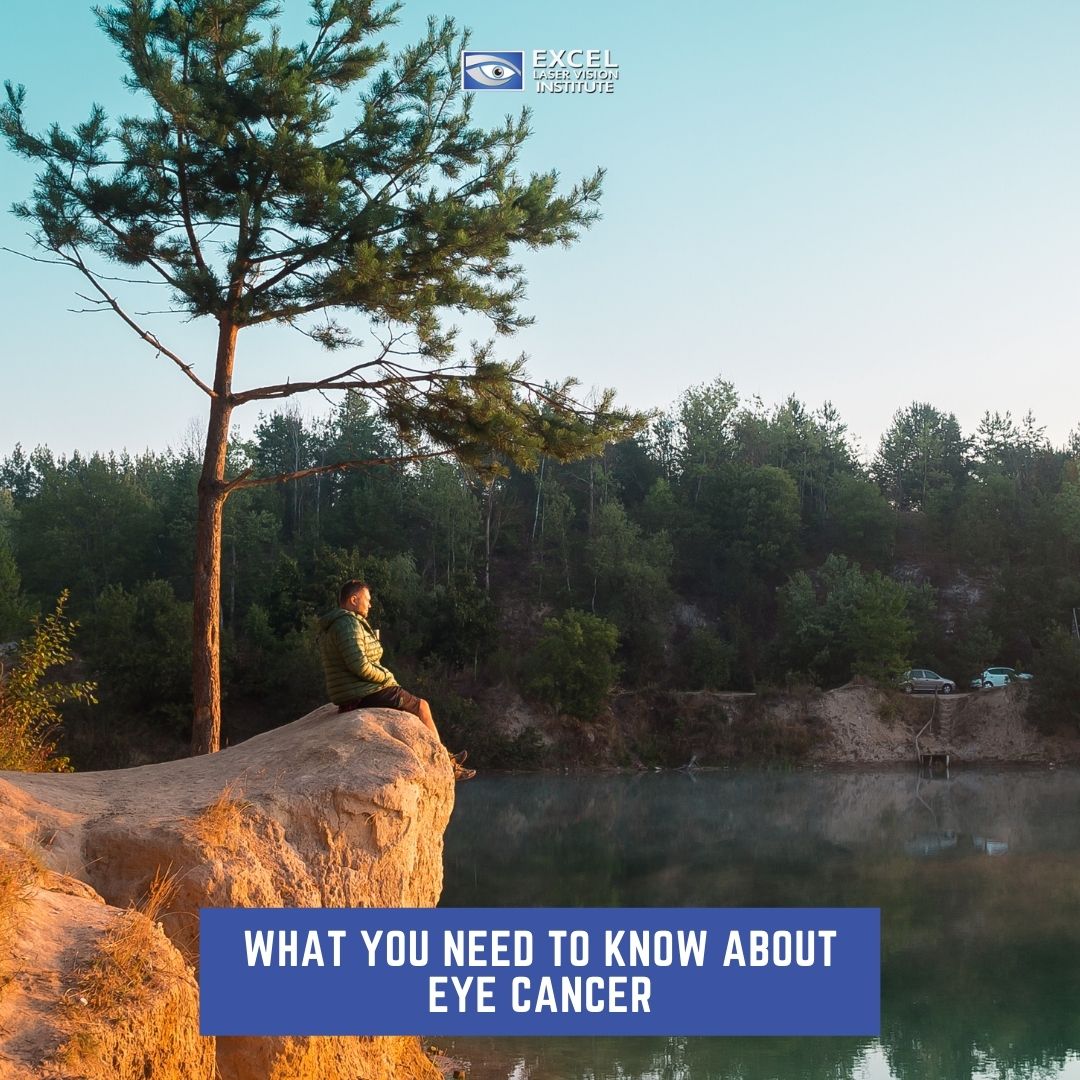 What You Need to Know About Eye Cancer

Eye cancer, medically referred to as ocular melanoma, is not one of the most discussed types of cancer, and this is for a good reason. However, as an eye patient, it is useful to have surface-level knowledge of eye cancer so that you can better educate and keep your visual health at an optimum level, and as Orange County LASIK surgery experts, it’s our job to answer all your questions on these topics. Here’s what you should know about it to help you address any possible concerns you may have: 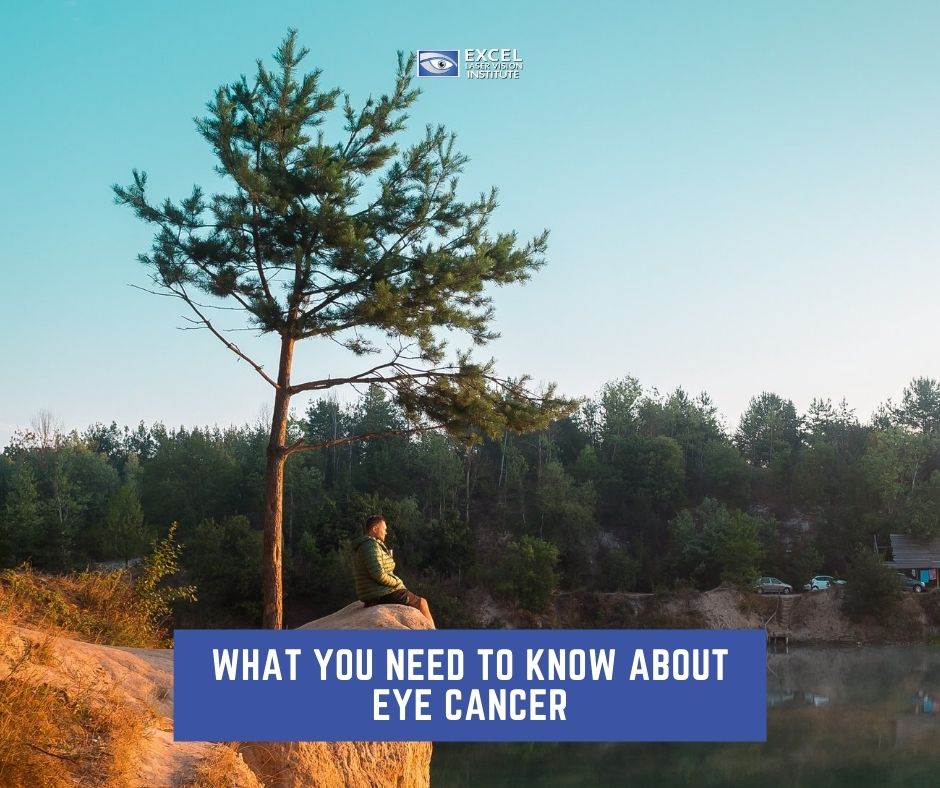 First, let’s get familiar with the three layers of your eyes 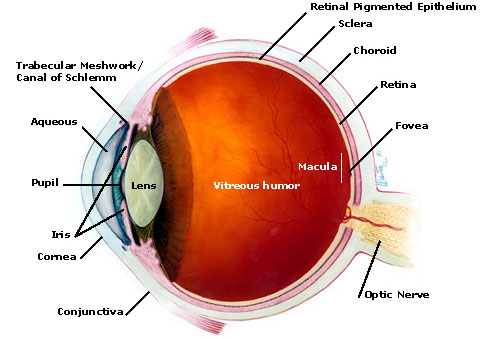 Sclera – The outer layer, the white part of your eye

It is not currently known by doctors the exact cause of eye cancer. However, we do know that certain populations are more at risk, including:

It is possible that overexposure to sunlight could be a risk factor, but scientists have not yet been able to confirm this speculation.

The SEER (Surveillance, Epidemiology, and End Results) database, maintained by the National Cancer Institute (NCI) classifies eye cancer in 3 groups: localized (cancer that has not spread beyond the eye), regional (cancer that has spread outside the eye to nearby areas), and distant (cancer that has spread further into the body). The more localized the eye cancer, the higher the rate of 5-year patient survival. Where exactly in the body the cancer originated from also plays a large factor into this.

This is the good news. Your chances of getting a form of eye cancer are 6 in 1 million, with only 3,500 new cases reported a year. The most common type in adults are uveal or choroidal melanoma, and the 5-year survival rate of eye cancer patients is an overwhelmingly high 84%. In children, the most common type of primary eye cancer is called retinoblastoma. As its name suggests, this is a disease where the cancerous cells appear in the retina.

Symptoms can include but are not limited to:

Be aware that some of these symptoms may not necessarily mean you have a form of eye cancer for sure. These can also be symptoms of other eye conditions. If you experience any of these, contact your eye care provider immediately for a formal evaluation.

How is it treated?

You may be wondering if specialized Orange County laser eye surgery may be the solution to the problem at hand. The answer is not so simple. Lasik is designated for correcting eyesight and cannot remove any cancerous tumors. Depending on the type of eye cancer, its severity, and an individual’s medical profile, there are several ways an eyecare doctor may go about treating it.

How you can decrease your risk

Although your odds of getting eye cancer at any stage of your life is slim and in itself is difficult to prevent, it is important that you continue to do all the necessary things to take care of your eyes, including taking breaks from cell phone and computer screens, eating healthy, wearing sunglasses when exposed to UV rays, exercising regularly, and refraining from smoking.

You are probably relieved to hear directly from the Orange County LASIK specialists that it’s unlikely that you will develop eye cancer, but that doesn’t mean that you can’t develop other forms of vision problems at some point. In order to remain healthy, you must prioritize every aspect of your body. Treat it as a vessel that is worthy of your respect in your everyday life. Think of it this way: it’ll be hard to look forward to anything if you can’t see! 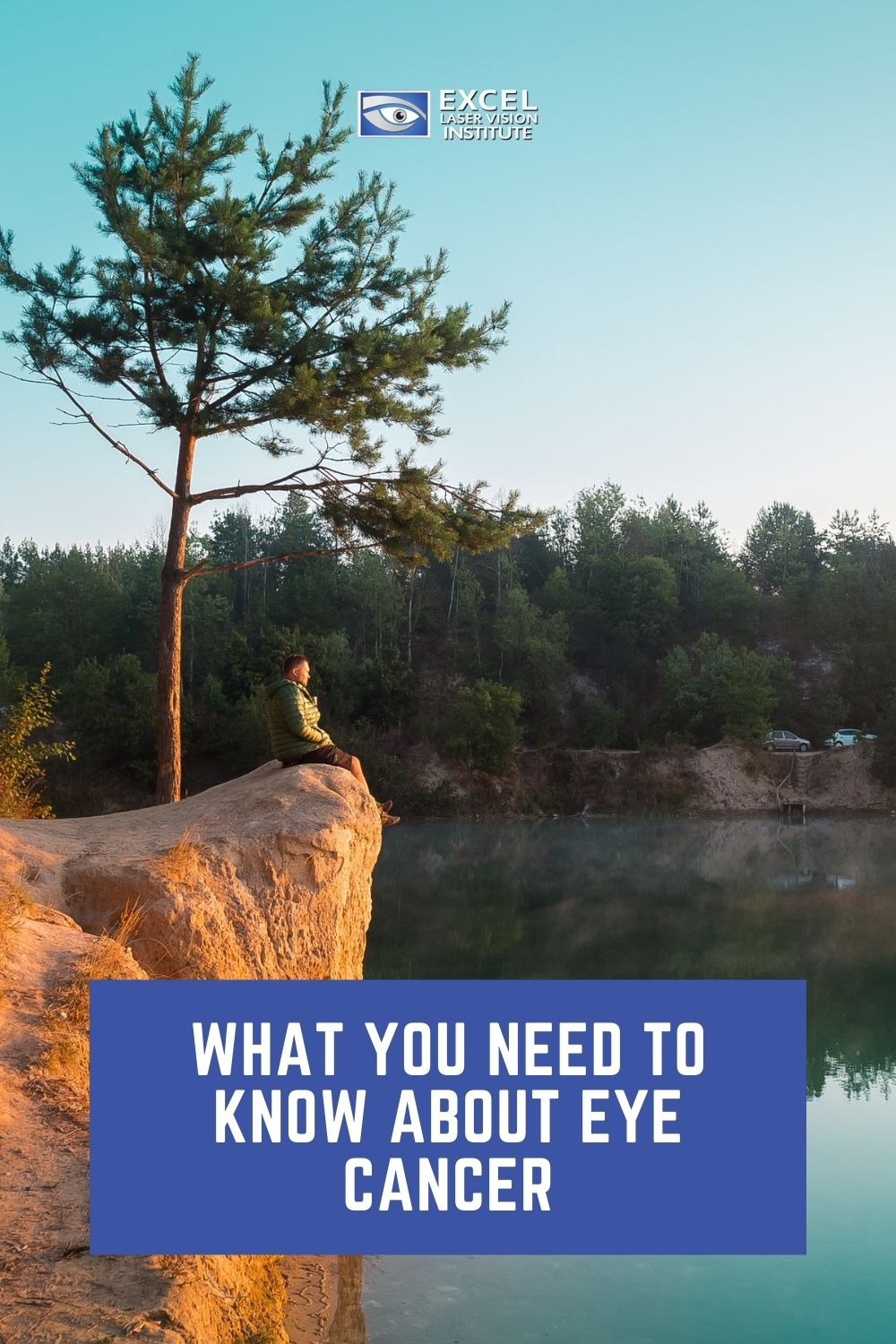